25 December 2021 – A very Merry Christmas to you all! Of course for most of us (if not all) it was again not a normal year because of the Corona virus, but let Bach's music help you to get through it! And Bach put a very big present for you under the Christmas tree... No less than eight magnificent pieces, from early works to mature compositions. Among them two of his absolute masterpieces: the first cantata of the Weihnachtsoratorium, and the Christmas version of his Magnificat (BWV 243a).

Christmas day 1723 was Bach's first Christmas as Thomaskantor, and he wanted to make an impression. In the morning service (7 AM) in the Nicolaikirche and for the vespers (1:30 PM) in the Thomaskirche he performed Christen, ätzet diesen Tag, BWV 63, a beautiful and very festive early cantata, a work he possibly first performed in Halle in 1713 during his Weimar period.

On that same Christmas Day 1723 for the vespers in the Nicolaikirche the Christmas version of the Magnificat, BWV 243a, was performed (and repeated the day after in the Thomaskirche), a work originally written for Visitation (July 2nd), but with the addition of 4 parts relating to Christmas.

Martin Luther was opposed to Latin in mass, but not for the structural parts of a mass that parishioners typically know by hart and which feel familiar. For these parts even music by Catholic composers was tolerated. Bach did one better that Christmas 1723, by not only composing the Magnificat mentioned above, but also an outstanding Sanctus, BV 238.

Christmas 1724 saw the creation of Gelobet seist du, Jesu Christ, BWV 91, the first of no less than 7 cantatas he would write for that Christmastide. He must have been really busy during the Tempus Clausum of the advent which gave him three weeks to focus on compositions. Like all cantatas of his second Leipzig cantata cycle, it is based on a protestant hymn, this one written by Martin Luther himself.

For Christmas 1725 he created Unser Mund sei voll Lachens, BWV 110. The opening chorus may sound familiar, as it is based on the Ouverture of Orchestral Suite BWV 1069 which he wrote in Köthen.

Ehre sei Gott in der Höhe, BWV 197a, was created for Christmas 1728 or 1729 and is partially lost; only the last four movements remain.

A recent Facebook post from the Bach Archiv - Bachfest Leipzig called Jauchzet frohlocket, the Leipziger Urbi et Orbi. Very original, and in my opinion (and probably yours too!) not really exaggerated. Jauchzet, frohlocket, BWV 248 1, is the opening cantata of one of Bach's true monuments, his Weihnachtsoratorium or Christmas Oratorio. This collection of 6 related cantatas was performed between Christmas 1734 and Epiphany 1735. It was never Bach's intention to play the 6 cantatas in one go, so I will also present them over the coming festive days in this Christmastide, on the actual days Bach intended them to be heard.

Imagine: the second performance of the Christmas Oratorio was in... 1857, 123 years later. Thanks to Eduard Grell and the Sing-Akademie zu Berlin this wonderful music was not forgotten. It shows that the fame that Bach enjoys today is not a given, and we should credit people like Grell or Felix Mendelssohn Bartoldy for rediscovering this then forgotten composer.

As closure of this impressive list of works is Gloria in excelsis Deo, BWV 191, created for Christmas day 1745, to celebrate the Peace of Dresden which ended the second Silesian war on that day. It is Bach's only cantata on a Latin text, and you could argue that it is not really a cantata, having only three parts, basically a very extravert piece of music, without the usual introvert passages found in a classical cantata. 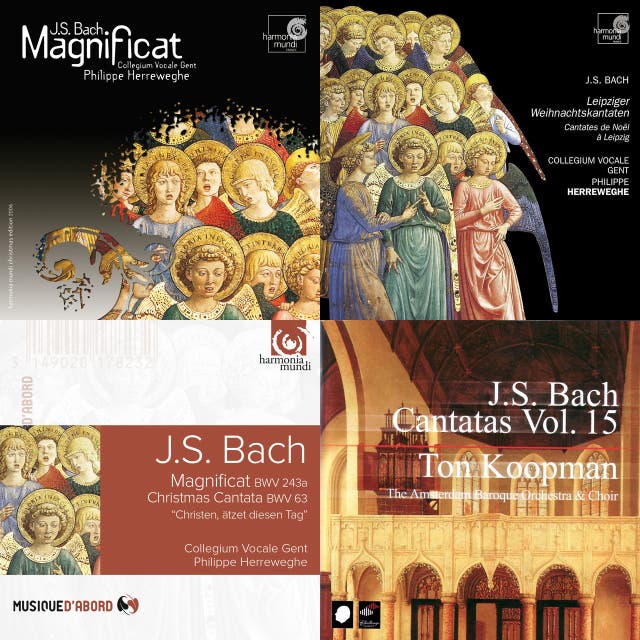 The nativity, a tempera on wood painting by Lorenzo Monaco (born Piero di Giovanni; c. 1370 – c. 1425), the leading painter in Florence in the early fifteenth century and active as a painter of illuminated manuscripts, frescoes and panel paintings.